Prime Minister Narendra Modi exhorted the students of the country to learn from failure to become successful in life.

At the third edition of ‘Pariksha pe Charcha’ - Prime Minister’s interaction with students ahead of their exams - he gave the analogy of the unsuccessful launch of Chandrayaan 2, India’s moon mission, last year.

“Some people advised me against going to Chandrayaan mission launch saying ‘there is no surety’, ‘what if it fails?’ I said that is precisely why I should go there. Even I was disturbed by the failure of Chandrayaan 2, but then I went to talk to the scientists and motivated them. I expressed my feelings and praised their hard work and about nation’s dreams. The mood changed, not just there, but across the country,” PM Modi said.

“What happened after that, you all know. Sometimes you can learn from failure,” he added.

He also talked about the 2001 India vs Australia match at Kolkata. Citing the example of Anil Kumble, who was injured during the match but still played and won the match, he said that it depends on us how we deal with the troubles.

The programme has been organised by the government as stress-buster for the students, where PM Modi is sharing tips to perform under pressure.

Around 2,000 students from all over the country are participating in the programme; 1,050 have been selected through short essays on five topics. 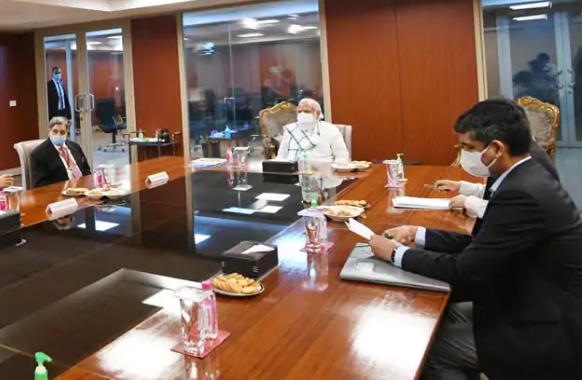 The satellites of India and Russia reached very close in space, both countries measured different distances